My three-month psychiatric incarceration seemed to be aimed at discrediting me after I had leaked newspaper stories. On my way to Canada to seek asylum, I was stopped by police. I evaded them for three days through rural towns and surrendered one midnight, from a ditch on a mountain pass.

It was hard for me to accept the way I was treated. Confined to a ward for two weeks, I walked in circles. I barked on the payphone testing many of my supports. They all just said I was delusional.

I really did learn a lot from a mob boss’s daughter. There are a lot to the rules that govern those of us who get trafficked in this land of the free. Still, I did what I could to disrespect the mob especially because my counselor told me not to. And so, I endured a month of chronic warehousing conditions. I had to wear other peoples’ clothes to brave the ice-cold of the barely heated ward.

Two and a half months in my psychiatrist finally responded to my requests to meet with her.

“You know, Tim, one time we had someone come here saying the FBI was following him. In fact, they were following him even though he hadn’t done anything wrong.”

Of course, I didn’t trust her enough to find out if she really was referencing me the way I thought she was.

Yes, I did endure some trauma that I needed to process. My most loyal friend who openly talked about a nefarious past had suddenly threatened me. Could he have had me set me up at the section 8 housing authority complex where I had been working? Additionally, I was in a ten-year emotional cutoff from my parents who were seeming connected to this threat. When the police intercepted me, manhandled me, and separated me from my car, I learned that it was my parents who had tipped them off.

As soon as I got out of the chronic unit, which could very well have prepared me for permanent warehousing, I started over again. I got a job at a daycare center and I got a dog. It was a promise I made to myself to endure the hospitalization. Something told me I would be okay with a simple life and a dog to care for. And so, I would find myself lucky to have an outlet for my generativity needs.

Shortly after I ran out of my month’s supply of medication from the hospital, I started to get overwhelmed by strange incidents on the streets. I lost my job. I strained to find employment and spent down most of my small savings.

Eventually, I did get a few job-offers, but I was seeing special broadcasts on the television. I was also getting sick from food I believed was being dosed with laxative powder. I reasoned the government sewed a tracking device into my dog when they fixed her. Everywhere I went I saw convincing evidence that reinforced these ideas.

An aunt said she could get me a job at an Italian Deli if I moved up closer to her. She could negotiate with my family who agreed to support me if I moved and accepted underemployment. I made the move to a town on the outskirts of the bay area.

My dog loved to play fetch and frisbee endlessly. I took her hiking, helped her build confidence, and she was grateful for our life together. But in the Bay Area, I had to leave her for twelve hours a day, as I biked and rode the train four-hours-a-day to work and back. Still, she never peed on the apartment rug once.

Of course, I was mad! I felt my mafia family didn’t set it up to be easy for me. It seemed like they wanted me to fail. I couldn’t count on their support if I didn’t maintain my job. I frequently accused them of being mafia and held them accountable for all my suffering.

I collected daily evidence that my apartment was being broken into. I figured either the mob or the U.S. government was walking my dog for me. I figured if they had the time to torment me in this manner, the least they could do was walk the dog for me.

But really, I was amazed my dog could be so loyal to endure twelve-hour days for me. I did everything in my power to make sure she was amply exercised. I didn’t mind when she chewed through everything I owned.

I continued to be unable to find employment outside the deli. The dozens of job-interviews I didn’t get had me convinced I was blacklisted.

Finally, after six months I got a car; then benefits came; and, finally, after ten months, I got back on medication. The level of harassment at work declined. I found work outside the Italian Deli.

I think it was my generativity for my dog that kept me going through the exceptionally hard situation. I was terrified of losing her. Lord knows I was not a perfect owner. I didn’t always exhibit the best judgment. On nights when I cried to my mother on the phone because mob kids had set me up to be fired, I never did get fired.

It was so humiliating to admit that what they said about me was correct, that I had schizophrenia. The corrupt world was fine if I took my medication. Suspicious deaths that happen in the section 8 housing projects can get covered up. Only my loyal dog could understand that this was wrong.

My dog lived to be sixteen and a half years. She and I grew once we got out of that Italian Deli. We had the greatest relationship and often became the envy of other dog owners at the dog parks. She was beautiful. She was loyal. She was proud of me despite what “they” said.

While everyone including the shrink that I saw just treated me like I was a drain and a bother to be around, I had a beautiful dog that needed me to care for her.

This site uses Akismet to reduce spam. Learn how your comment data is processed. 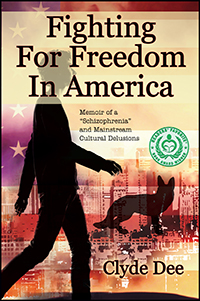 Fighting for Freedom in America: Memoir of a "Schizophrenia" and Mainstream Cultural Delusions